The Connemara snapping turtle (Chelydra serpentina occidentalis) is a large freshwater turtle of the family Chelydridae. Its natural range is within Connemara and Joyce Country, in the west of the Republic of Ireland. A close relative of the common snapping turtle, found in North America, it is the only species of snapping turtle to inhabit Western Europe.

The Connemara snapping turtle, similar to its North American counterpart, is noted for its combative disposition when out of the water with its powerful beak-like jaws, and highly mobile head and neck (hence the specific name serpentina, meaning "snake-like"). In water, they are likely to hide in sediment, awaiting the disturbance of the surface by passing animals which they predate. They have been known to attack animals as large as red deer.

Connemara snapping turtles have a life-history strategy characterized by high and variable mortality of embryos and hatchlings, delayed sexual maturity, extended adult longevity, and iteroparity (repeated reproductive events) with low reproductive success per reproductive event. Connemara snapping turtle mature later (at 16-22 years) and at a significantly larger size than their American progenitors, C. serpentina. Lifespan in the wild is unknown, but is expected to be similar to that of C. serpentina, up to 100 years (based on long-term mark-recapture data Algonquin Park in Ontario, Canada).

C. S. occidentalis has a rugged, muscular build with ridged carapaces (particularly in mature males). The carapace (upper shell) length in adulthood may be nearly 80cm, though 40-60cm, is more common. C. S. occidentalis usually weighs 24-41kg. Males are larger than females, with almost all animals weighing in excess of 31kg being male and quite old, as the species continues to grow throughout life. Any specimen above the aforementioned weights are exceptional, but the heaviest wild specimen caught reportedly weighed 67kg. 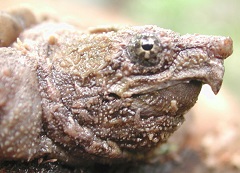 The head of a young Connemara snapping turtle at six months.

Common habitats are shallow ponds or streams. Some may inhabit brackish environments, such as estuaries. Connemara snapping turtles sometimes bask - though rarely observed - by floating on the surface with only their carapaces exposed, though they also readily bask on grass in early spring. In shallow waters, they may lie beneath a muddy bottom with only their heads exposed, stretching their long necks to the surface for an occasional breath (their nostrils are positioned on the very tip of the snout, effectively functioning as snorkels). Snapping turtles consume both plant and animal matter, and are important aquatic scavengers, but they are also active hunters that prey on anything they can swallow, including many invertebrates, fish, frogs, unwary birds, and mammals. Connemara snapping turtles have been a menace to sheep farming in their range, as they occasionally attack and badly injure sheep, despite being unable to consume them.

Connemara snapping turtles have few predators when older, but eggs are subject to significant predation by crows and foxes. As hatchlings and juveniles, foxes will continue to attack them. Other natural predators which have reportedly preyed on adults include red deer.

These turtles travel extensively over land to reach new habitats or to lay eggs. Pollution, habitat destruction, food scarcity, overcrowding, and other factors drive snappers to move; it is quite common to find them traveling far from the nearest water source. This species mates from April through November, with their peak laying season in June and July. The female can hold sperm for several seasons, using it as necessary. Females travel over land to find sandy soil in which to lay their eggs, often some distance from the water. After digging a hole, the female typically deposits 25 to 80 eggs each year, guiding them into the nest with her hind feet and covering them with sand for incubation and protection. Incubation time is temperature-dependent, ranging from 9 to 18 weeks. Hatchlings overwinter in the nest. The Connemara snapping turtle is remarkably cold-tolerant.

In their environment, they are typically at the top of their food chain, causing them to feel less fear. When they encounter a species unfamiliar to them such as humans, they usually react aggressively, ramming the feet or locking their jaws onto the ankle of a person they come into contact with, sometimes causing bone fractures. They are particularly attracted to hillwalkers, perhaps due to the bright-coloured clothing they typically wear. This behaviour, however, is not displayed by the young, who will usually slip quietly away from any disturbance or may seek shelter under mud or grass nearby. Snapping turtles are believed to have evolved the ability to snap because, unlike other turtles, they are too large to hide in their shells when confronted; snapping is their defense mechanism.

The Connemara snapping turtle is unsuitable to keep domestically, and indeed is categorized as an illegal exotic pet in the Republic of Ireland. Veterinary care is best left to a reptile specialist.

Connemara snapping turtles were formerly kept in captivity in Dublin zoo, however they were removed in 2008 due to an incident resulting in the death of several penguins, and the loss of a zookeeper's foot. There is an absence of concern for the conservation of their species as they are relatively abundant in Connemara National Park.

It is a common misconception that snapping turtles may be safely picked up by the tail with no harm to the animal; in fact, this has a high chance of injuring the turtle, especially the tail itself and the vertebral column. Lifting the turtle with the hands is difficult and dangerous. Snappers can stretch their necks back across their own carapace and to their hind feet on either side to bite. When they feel stressed, they release a musky odor from behind their legs.

Just for the fun