A brief history of the Maamturks Walk

The Maamturks Walk was first organised by Coiste Pobail an Mháma in 1973, as a tourism initiative (Jack Hanley). The UCG Mountaineering Club (now NUIG MC) became involved in 1975, although close links with the community have been maintained up to the present day; Keane’s of An Mám has facilitated the organisation of the walk in many ways over the years, and the walk has been co-ordinated from Ionad Pobail an Mháma since 2011. You read about Barbara Buckley memories of a trial walk on the Maamturks, 1974.

A recce of the route was carried out by members of the club (in April or May 1974 according to Barbara Buckley) and the first Maamturks Walk organised by UCG MC was held in July of 1975. 80 participants took part in the 1975 walk, with 120 attempting it the following year, including the noted Irish mountaineer, Joss Lynam (Simon Stewart). The walk was subsequently moved to May to better fit in with the academic calendar, and ensure the availability of student volunteers on the day. Some other organisational inadequacies were also addressed with the introduction of radios in 1976, courtesy of the ESB (Derry O’Connor).

The official notice of the 1976 walk survives (thanks to Pat McMahon), and the contact given for further information is the late Tony Whilde, who was a key figure in the foundation of UCG MC. The notice states ‘The walk is open to experienced mountaineers only and is a test of endurance and navigation skills rather than speed’. And so it remains to this day. The start time was 7-9am, which may seem rather late (most walkers leave before 6am at present), this reflected the later date of the walk at the time. The walk began at the base of Corcóg (labelled, mistakenly, Lackavrea, on the old 1/2″ OS maps used at the time) and the entry fee was 50 pence!

The walk had shifted to its now customary mid-to-late April date by this time, with registration for the 1999 walk taking place between 7 and 8am on the 24th of April of that year. There was a walk limit of 300, though only 210 (according to Simon Stewart) participants began the walk on what was reportedly a very wet and windy day. A number of of walkers remained unaccounted for by the time darkness fell, forcing those manning the later checkpoints to remain on the mountain late into the evening. Tragically, Michael Crosbie, a member of the Galway Radio Club, died while descending from the Leenane Hill checkpoint (where he had been the radio steward) with his companions. It seems that he lost his footing around 10.30pm that night, in appalling conditions, and was fatally injured (Simon Stewart). There is a plaque to his memory in Leenane.

In light of this tragedy a number of changes were made to the organisation of the walk in subsequent years. All checkpoint teams must now descend before darkness – with Mountain Rescue stepping in at this point if required. Participation was capped at 200 walkers and an earlier start time of 5am-7am was introduced. An additional checkpoint was added (at the ‘Col of Despondency’ or Breaclach an Mháma as it is known locally), with a cut-off of 5pm – after which walkers are directed to Finish 2 at Glencraff.

No walk was held in 2001 due to the Foot and Mouth outbreak. The 2003 walk was cancelled due to poor weather conditions (Mark O’Callaghan). 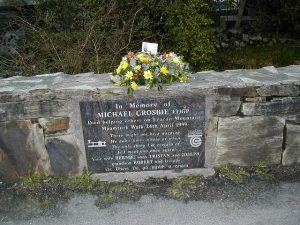 Plaque to the memory of Michael Crosbie 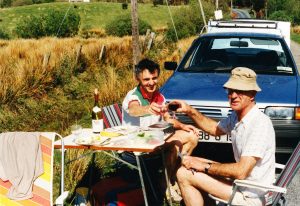 Some volunteers enjoying the sun! 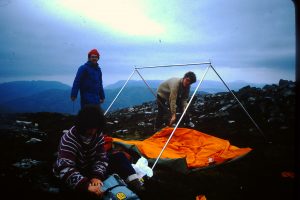 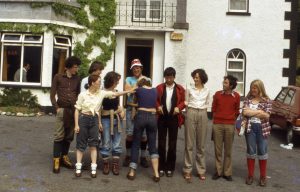 Some past and present volunteers!

1991 was the first year of the Galway Radio Club’s involvement with the walk. The Radio Club introduced a significantly improved communications system – including a high-powered base station in the Maam Valley, ensuring good co-ordination between ‘Walk Control’ and all checkpoints and finishes, in an era when mobile phones did not feature. Some familiar names were there right from the start – Tom Frawley, Ronan Coyne, Des Chambers, John Quinn, Adrian Jackson, Stan O’Reilly, Pat McGrath (1991 radio stewards – from Pat McMahon archive). Walk Control was based in a caravan strategically located outside Joe Keane’s. This was later replaced by a van, and as already mentioned, is now usually located in Ionad Pobail an Mháma. 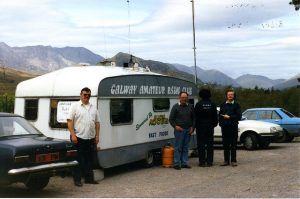 Walk control in the past 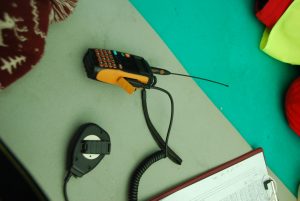 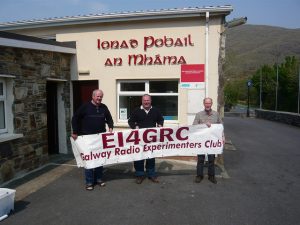 The 1976 notice states that Kerry Mountain Rescue Association would be on hand for the day. The 1977 checkpoint plan includes a ‘Rescue’ section, which consisted of ‘C. O’Gorman, A. Whilde, P. Hughes, J. Daniels & Local [person]’. Five people were assigned to the rescue detail on the 1978 checkpoint plan (‘C. O’Gorman, G. Daniels, C. Henessy, P. Kearns, T. Whilde’) which was now entitled ‘Mountain Rescue’. This detail must surely represent the beginnings of what is now the Galway Mountain Rescue Team (GMRT). GMRT continue to provide support and rescue services for the walk up to the present day. 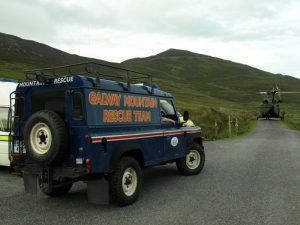 The usual route of the walk is from the base of Corcóg to Leenane. As far as I am aware this orientation has been continuous since at least 1998. Previous to this the walk was, on occasion, run the opposite way, from Leenane to the base of Corcóg. The 1992 walk, which was held on the 2nd of May, ran Leenane–Corcóg, with a 15.30 cut-off at Mám Éan, and an additional checkpoint on Mullach Glas. The 1987 walk also ran Leenane–Corcóg, again with a 15.30 cut-off at Mám Éan. 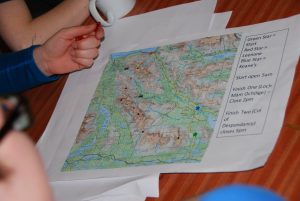 There have been significant changes to the registration process in recent years, with all walkers now registering for the walk in advance. Personal details/gear can now be checked, and walker numbers assigned, the night before the walk, in Joe Keane’s. This is aimed at speeding up the check-in process on the morning of the walk. 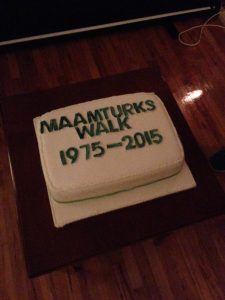 The 2015 walk was held on a beautiful clear day (April 18th), but was also made memorable by the screening of a documentary on the forty-year history of the walk (produced by club member Kevin Geoghegan). The film was shown in the Leenane Hotel on the evening of the walk, with the day’s walkers, club members and many of those associated with the organisation of the event in past years in attendance. The film was well received and the material compiled during production, along with many of the contributions to the film itself, formed the basis of this article.

The use of the name ‘Maamturks Challenge’ is a relatively recent, and seemingly accidental development, going back no further than 2010. The change may have arisen from a misinterpretation of an internal organisational manual drawn up in June 2009 entitled ‘Annual Maamturks Challenge Walk: Organisational Manual’. For most of its history the event has been known as the Maamturks Walk – or ‘The Maamturks’ for short!

This documentary was produced by Kevin Geoghegan & Niall Keher on behalf of the club.

If you have any more information, or records that could be added drop us a line at Maamturks@nuigmc.com